The 1 Percent Rule: Why a Few People Get Most of the Rewards

Sometime in the late 1800s—nobody is quite sure exactly when—a man named Vilfredo Pareto was fussing about in his garden when he made a small but interesting discovery.

Pareto noticed that a tiny number of pea pods in his garden produced the majority of the peas.

Now, Pareto was a very mathematical fellow. He worked as an economist and one of his lasting legacies was turning economics into a science rooted in hard numbers and facts. Unlike many economists of the time, Pareto’s papers and books were filled with equations. And the peas in his garden had set his mathematical brain in motion.

What if this unequal distribution was present in other areas of life as well?

At the time, Pareto was studying wealth in various nations. As he was Italian, he began by analyzing the distribution of wealth in Italy. To his surprise, he discovered that approximately 80 percent of the land in Italy was owned by just 20 percent of the people. Similar to the pea pods in his garden, most of the resources were controlled by a minority of the players.

Pareto continued his analysis in other nations and a pattern began to emerge. For instance, after poring through the British income tax records, he noticed that approximately 30 percent of the population in Great Britain earned about 70 percent of the total income.

As he continued researching, Pareto found that the numbers were never quite the same, but the trend was remarkably consistent. The majority of rewards always seemed to accrue to a small percentage of people. This idea that a small number of things account for the majority of the results became known as the Pareto Principle or, more commonly, the 80/20 Rule.

In the decades that followed, Pareto’s work practically became gospel for economists. Once he opened the world’s eyes to this idea, people started seeing it everywhere. And the 80/20 Rule is more prevalent now than ever before.

For example, through the 2015-2016 season in the National Basketball Association, 20 percent of franchises have won 75.3 percent of the championships. Furthermore, just two franchises—the Boston Celtics and the Los Angeles Lakers—have won nearly half of all the championships in NBA history. Like Pareto’s pea pods, a few teams account for the majority of the rewards.

The numbers are even more extreme in soccer. While 77 different nations have competed in the World Cup, just three countries—Brazil, Germany, and Italy—have won 13 of the first 20 World Cup tournaments.

Why does this happen? Why do a few people, teams, and organizations enjoy the bulk of the rewards in life? To answer this question, let’s consider an example from nature.

The Power of Accumulative Advantage

Imagine two plants growing side by side. Each day they will compete for sunlight and soil. If one plant can grow just a little bit faster than the other, then it can stretch taller, catch more sunlight, and soak up more rain. The next day, this additional energy allows the plant to grow even more. This pattern continues until the stronger plant crowds the other out and takes the lion’s share of sunlight, soil, and nutrients.

From this advantageous position, the winning plant has a better ability to spread seeds and reproduce, which gives the species an even bigger footprint in the next generation. This process gets repeated again and again until the plants that are slightly better than the competition dominate the entire forest.

Scientists refer to this effect as “accumulative advantage.” What begins as a small advantage gets bigger over time. One plant only needs a slight edge in the beginning to crowd out the competition and take over the entire forest.

Something similar happens in our lives.

The difference between these options can be razor thin, but the winners enjoy massively outsized rewards.

Imagine two women swimming in the Olympics. One of them might be 1/100th of a second faster than the other, but she gets all of the gold medal. Ten companies might pitch a potential client, but only one of them will win the project. You only need to be a little bit better than the competition to secure all of the reward. Or, perhaps you are applying for a new job. Two hundred candidates might compete for the same role, but being just slightly better than other candidates earns you the entire position.

Situations in which small differences in performance lead to outsized rewards are known as Winner-Take-All Effects.

These situations in which small differences in performance lead to outsized rewards are known as Winner-Take-All Effects. They typically occur in situations that involve relative comparison, where your performance relative to those around you is the determining factor in your success.

Not everything in life is a Winner-Take-All competition, but nearly every area of life is at least partially affected by limited resources. Any decision that involves using a limited resource like time or money will naturally result in a winner-take-all situation.

In situations like these, being just a little bit better than the competition can lead to outsized rewards because the winner takes all. You only win by one percent or one second or one dollar, but you capture one hundred percent of the victory. The advantage of being a little bit better is not a little bit more reward, but the entire reward. The winner gets one and the rest get zero. 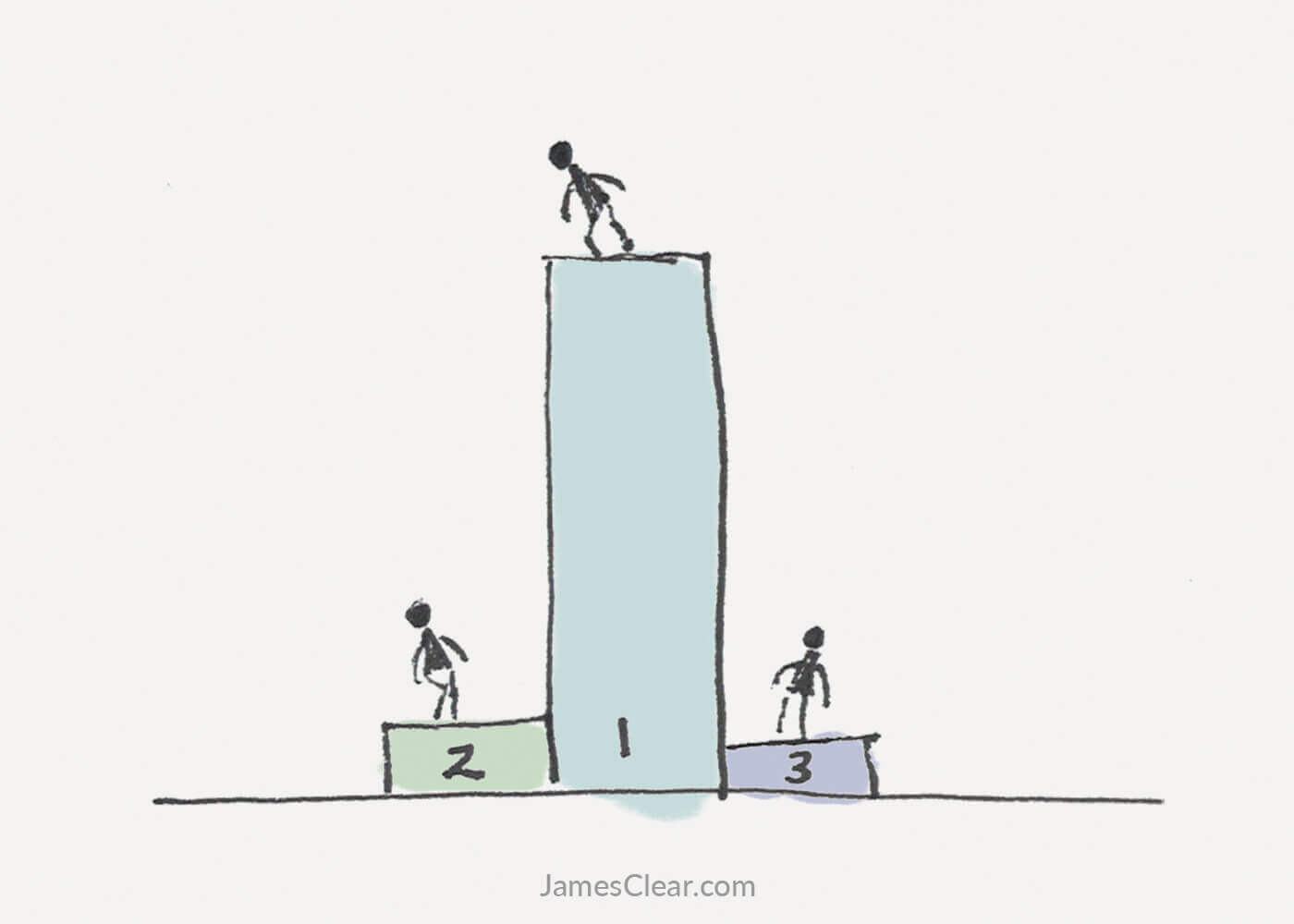 From this advantageous position—with the gold medal in hand or with cash in the bank or from the chair of the Oval Office—the winner begins the process of accumulating advantages that make it easier for them to win the next time around. What began as a small margin is starting to trend toward the 80/20 Rule.

If one road is slightly more convenient than the other, then more people travel down it and more businesses are likely to build alongside it. As more businesses are built, people have additional reasons for using the road and so it gets even more traffic. Soon you end up with a saying like, “20 percent of the roads receive 80 percent of the traffic.”

If one business has a technology that is more innovative than another, then more people will buy their products. As the business makes more money, they can invest in additional technology, pay higher salaries, and hire better people. By the time the competition catches up, there are other reasons for customers to stick with the first business. Soon, one company dominates the industry.

If one author hits the best-seller list, then publishers will be more interested in their next book. When the second book comes out, the publisher will put more resources and marketing power behind it, which makes it easier to hit the best-seller list for a second time. Soon, you begin to understand why a few books sell millions of copies while the majority struggle to sell a few thousand copies.

The margin between good and great is narrower than it seems. What begins as a slight edge over the competition compounds with each additional contest.

The margin between good and great is narrower than it seems. What begins as a slight edge over the competition compounds with each additional contest. Winning one competition improves your odds of winning the next. Each additional cycle further cements the status of those at the top.

Over time, those that are slightly better end up with the majority of the rewards. Those that are slightly worse end up with next to nothing. This idea is sometimes referred to as The Matthew Effect, which references a passage in The Bible that says, “For all those who have, more will be given, and they will have an abundance; but from those who have nothing, even what they have will be taken away.”

Now, let’s come back to the question I posed near the beginning of this article. Why do a few people, teams, and organizations enjoy the bulk of the rewards in life?

Small differences in performance can lead to very unequal distributions when repeated over time. This is yet another reason why habits are so important. The people and organizations that can do the right things, more consistently are more likely to maintain a slight edge and accumulate disproportionate rewards over time.

You only need to be slightly better than your competition, but if you are able to maintain a slight edge today and tomorrow and the day after that, then you can repeat the process of winning by just a little bit over and over again. And thanks to Winner-Take-All Effects, each win delivers outsized rewards.

We can call this The 1 Percent Rule. The 1 Percent Rule states that over time the majority of the rewards in a given field will accumulate to the people, teams, and organizations that maintain a 1 percent advantage over the alternatives. You don’t need to be twice as good to get twice the results. You just need to be slightly better.

The 1 Percent Rule is not merely a reference to the fact that small differences accumulate into significant advantages, but also to the idea that those who are one percent better rule their respective fields and industries. Thus, the process of accumulative advantage is the hidden engine that drives the 80/20 Rule.

If all our clients are happy, then we're happy because that's what we aim to achieve as corporate sales brokers.

If you have a Business for Sale or you are Selling a Business. Trident Business and Corporate Sales makes it easy.

We are Melbourne's best business brokers & business sales agents. We will get you the results you are after. Our service is convenient, and contacting us is easy. You can phone us on 03 8687 2116 or email us at sales@tridentbusiness.com.au for prompt service and the answers you need.